“Carmageddon” hit Los Angeles this weekend. In case you hadn’t heard, LA shut down the 405, one of its biggest freeways, late Friday night to do road work. The effect was supposed to be a motor vehicle apocalypse, causing massive delays, road rage, famine and pestilence.

As it turns out, traffic was minimal and the work was finished ahead of time. In fact, when I flew back to L.A. from Phoenix on Sunday morning, my drive home from the airport was the fastest it has ever been. That allowed me to watch the event of the weekend, the sensational Women’s World Cup final, which headlines this week’s Cheers and Boos. 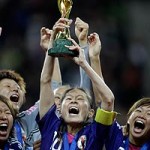 CHEERS – For the Japanese women, who outlasted the US in the final. Outwomanned (I think I just made that word up), outsized and supposedly outclassed, the Nadeshiko (as they are nicknamed) rallied to tie with 10 minutes left in regulation, equalized again with three minutes left in overtime, then overwhelmed the Americans in penalty kicks. The championship didn’t bring back those who perished in the tsunami, earthquake and nuclear meltdown, but I’m guessing it gave many in Japan cause for joy in a year that has seen such tragedy.
BOOS – To soccer, for having penalty kicks determine the winner. That’s like having a home run derby end the World Series, a field goal kicking contest finish the Super Bowl or a free throw shooting competition produce the NBA title. Heck, even hockey is smart enough not to have penalty shots decide any major championships. Oh wait, they do that in the Olympics. Never mind.
CHEERS – For Darren Clarke, who finally won a major at age 42 when he captured the British Open Championship. The everyman who likes his pints and his cigars played fantastic golf all weekend and never blinked on Sunday.
BOOS – To Phil Mickelson’s fans, who I’m sure deluded themselves into thinking his great play on the front nine in the final round would lead to a victory. Of course, Phil pulled a Phil, which means he raised their hopes and then crushed them, turning a dramatic charge into an agonizing series of missed putts and a bridesmaid finish for the seventh time in a major.
CHEERS – For Dustin Pedroia, who went 3-7 with the game-winning RBI in the Red Sox 1-0, 16-inning win against Tampa Bay.
BOOS – To the rest of the hitters in the game, who went 6-95 (no, that’s not a typo) in a game that took five hours and 44 minutes to play.
CHEERS – For Desmond Howard, who was enshrined in the College Football Hall of Fame Saturday night. Howard won the Heisman Trophy in 1991, a campaign that picked up major momentum when he was on the receiving end of the greatest play I ever saw live at Michigan Stadium ! Not only was the catch incredible, but it clinched a win against Notre Dame and Lou Holtz and ended a four-game Wolverines losing streak to the Irish.