Tweet It’s the last Monday in August, which means summer is coming to an end.  Recently, thanks to Facebook, I’ve been reminiscing about the summers of my youth, spending July and August each year on the shores of Lake Pontoosuc at Camp Wahconah (for girls) – Potomac (for boys) in Pittsfield, Massachusetts.  It was great for boys like me, a chance to play sports during the day, then hang out with girls at night.

The one drawback was my Little League season always ended before All-Star play began.  Granted, I wasn’t always one of the best players, but there were a couple of years at the end of my career when I was selected for the team, but my parents sent me to camp before the tournaments started.  I’ll always wonder what it might’ve been like to reach South Williamsport, PA, with a chance to win the title, unlike the kids from California, who don’t have to wonder at all after Sunday. 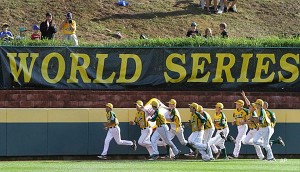 A STANDING OVATION for the boys from Huntington Beach, who captured the Little League World Series when Nick Pratto singled home the winning run with the bases loaded and two outs in the bottom of the sixth against Japan.  As if the moment wasn’t good enough, Pratto was lucky enough to share it with his father, who managed the team.  Of 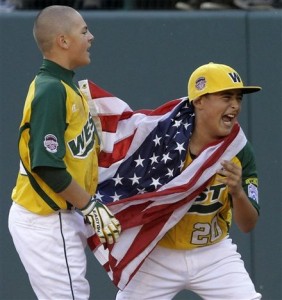 course, in classic son fashion, Pratto did say his father, “kind of gets on my nerves sometimes.”
CHEERS for the entire Little League World Series tournament, which brought our record crowds to see great teams, exciting games and good sportsmanship.
BOOS to the Yankees and the Orioles, who remind us of all the worst in sports, by arguing over the date of a make-up game that needs to be played courtesy of Hurricane Irene.  Seriously, both teams, shut up!
CHEERS for the Angels taking a chance and pitching Ervin Santana and Jered Weaver on three days rest against the Rangers.  Los Angeles needed to win at least one game in the series and the back end of its rotation is awful.  Santana came through with a win but Weaver struggled and lost.  Still, the team showed it’s not afraid to challenge convention in an effort to reach the postseason.
BOOS to Dan Haren, who was absolutely abysmal pitching in the first game of the AL West showdown.  On regular rest, Haren was blasted for seven runs on 11 hits in less than five innings.
CHEERS for the US Open tennis tournament, starting Monday.  Maybe now that Hurricane Irene has come and gone, the annual event in Queens, New York, will enjoy great weather and thrilling matches. 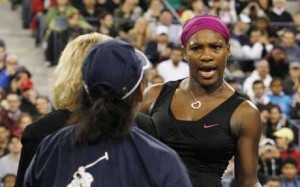 BOOS to Hurricane Serena, considering two years have passed and she still can’t deal with the aftermath of her tirade toward a line judge.
CHEERS for the start of college football this Thursday night.  After all the off-field embarrassments, it’s time to enjoy the on-field fun.