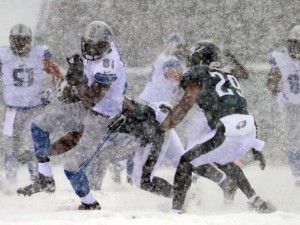 Too much snow for Megatron

2) Tony Romo is NOT a clutch QB – throw out as many stats as you like, it still doesn’t make it so.

3) If the Minnesota Vikings ever start believing in themselves, they might not be half-bad.

4) Had Steelers‘ WR Antonio Brown not stepped out of bounds on the final play against Miami, the TD still would not have counted – Roethlisberger made an illegal forward pass, which would have nullified the score.

5) The DC meltdown is complete. Washington Redskins head coach Mike Shanahan is done. To avoid an ugly public divorce, he should probably just resign because of “personal reasons”.

6) The only thing missing from the last two mins of the Vikings/Ravens game, was the network switching to ‘Heidi’.

8) The Cleveland Browns are losers, plain and simple. Forget the questionable PI call at the end; all they had to do was cover the onside kick which the entire planet knew was coming, and the game would have been over. Josh Gordon’s considerable talents are being wasted.

10) The NFL starts haphazardly penalizing and fining defensive players for high hits, and now there is a concern over the increasing number of low hits. Who coulda seen that coming ?