My Life as a Dad 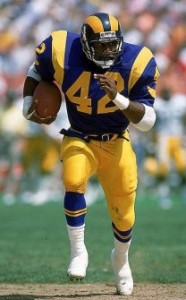 This week’s ‘My Life as a Dad‘ episode, features former NFL running back Greg Bell. Bell played NFL football from 1984-1990.He played for the Buffalo Bills, Los Angeles Rams, and Los Angeles Raiders. Bell made the Pro Bowl in 1984, and was NFL comeback player of the year, in 1988. Bell had 51 career TD’s.
In this “MLAAD” episode, the retired pro football player shares advice for Dads, and talks about his family background and kids.
This entry was posted in My life as a dad, Uncategorized and tagged football, greg bell, greg bell los angeles, my life as a dad, nfl. Bookmark the permalink.