On the heels of a 5-1 victory at home over the Vegas Golden Knights on Saturday, Dec 8, 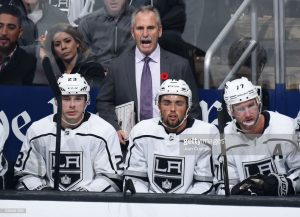 the Los Angeles Kings are about to embark on a four-game East coast road trip which will see them face the Detroit Red Wings, Buffalo Sabres, Columbus Blue Jackets and Pittsburgh Penguins.

At the helm for the Kings, is interim Head coach Willie Desjardins, who took over on November 4, when former Head coach John Stevens was relieved of his duties. Although the team still sits near the bottom of the standings, the season is young and there is still hope.

When Desjardins took over, he knew it was going to be tough and did not promise any quick solutions, although he has tried to instill a sense of urgency upon the players. He may also feel that urgency, because his contract only lasts until the end of this season.

“You’ve got to find a way to make this season work,” Desjardins said. “What exactly it is, we’ve got to find out.” So far, the Kings are still searching.

He had some success coaching the Vancouver Canucks from 2014-17; his first NHL head coaching gig. Desjardins also took the Canadian national team to an Olympic bronze medal last February, so he has both experience and credibility.

The Kings are a tough assignment for him. They haven’t been able to reach the caliber of play they experienced during their Stanley Cup championship seasons in 2012 and 2014 while being led by head coach Darryl Sutter, who is now retired.

There are some top-notch players that remain on the roster which includes Drew Doughty, Anze Kopitar, Jeff Carter and Jonathan Quick.

“Coming in here, it’s a great situation,” Desjardins said. “I think there’s lots to work with. Sometimes you have situations where you don’t have much of a chance to be successful. They’ve got a lot of good pieces here. There’s some really quality people within this team, some high-end guys.”

When Desjardins first took over, he didn’t want to immediately alter the Kings’ playing methods, so he’s been leaning on assistant coach Dave Lowry, as he tries to get more productive results while using basically the same schemes used under Stevens. While with the Canucks, Desjardins was known to make unusual lineup decisions. This philosophy seems to have transferred over to the Kings, as most notably, he made a decision to use veteran sniper Ilya Kovalchuk on the fourth line instead of the first two lines where he usually plays.

Desjardins is hoping he can earn the players trust with some of the decisions being made. He hasn’t fixed everything that needs fixing, but he’s got time to work on it. They have yet to reach the halfway point of the season

Some weaknesses that he’s trying to turn into strengths, are the Kings inability to generate goal-scoring, meager shot creation, team defense, and an inconsistent power play.

Time will tell if it is about the new coach or the players are simply not getting the job done. This road swing, against four playoff-caliber teams, should reveal a lot about the coaching of Desjardins and the character of the team.