Another Jewel for Star-studded LA Dodgers 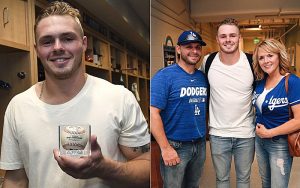 On Sep. 2, 2019, a cool, calm and confident 21-year-old left-handed-hitting Gavin Lux, made his major league debut with the LA Dodgers on Labor Day at Dodger Stadium in front of 45,910 enthusiastic fans. He came up to the plate in the bottom of the second inning and hit the first pitch, delivered by Rockies pitcher Peter Lambert, up the middle for a single, and his very first major league hit. In the bottom of the third inning, for his second at-bat, Lux then doubled.

Welcome to the party, Gavin.

Lux got his break after Max Muncy became sidelined with a minor wrist fracture that will keep him on the shelf for about two weeks. Because of this, the Dodgers decided they needed more depth at second base.

Circumstances aside, Lux definitely earned the call-up from Triple-A Oklahoma City. His performance had been sensational – hitting .392/.478/.719 with 13 homers over 232 plate appearances.

He was selected as the 20th overall pick in the 2016 draft, after having appeared on top-100 prospect lists, with Baseball America listing him as the ninth-best prospect.

Lux played many games as a shortstop, but also was assigned to second base in preparation to be utilized in the infield and lineup for the Dodgers. Corey Seager is the usual starting shortstop, so Lux will probably get most of his playing time at second, with Muncy on the IL and the Dodgers coasting into the playoffs as long-time leaders in the NL West. If Lux performs well, he just might make it onto a postseason roster which already has an enviable amount of depth.

The Dodgers were wise to resist all trade offers since Lux was drafted.

During his debut game, the youngster made history by becoming the first Dodger since 1920, to score three or more times in his MLB debut.

The Kenosha, WI native, who was drafted out of Indian Trail High School, had this to say about his debut; “It was my debut and obviously I was nervous. First ground ball, first at-bat, Okay, weight off my shoulders. I enjoyed it a lot. My first at-bat was a little emotional.”

His mom and dad were sitting in the stands to watch their son perform in his first game. “I saw a video of my first hit and my dad started crying,” Lux said. “Oh, man, I thought he was the tough guy out of all of them.”

Lux gave the memorable first-hit baseball to his parents.

After the game, Dodgers manager Dave Roberts mentioned how impressed he is with Lux’s performance.

“Up and down the lineup, obviously, initially, everyone’s excited about Gavin making his debut,” Roberts said after the four hour and six-minute game in which the Dodgers handily won 16-9. “He showed well tonight, really taking good at-bats and defensively gets off the ball really well, moves really well. We knew in spring training that Gavin has great potential. The way he fits into his uniform, his body type, and the way he plays the game.”

In his debut game, Lux went 2-for-5 (.400) at the plate and made three really good plays at second base.

With Lux, the future is now. 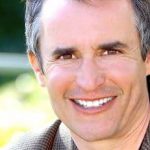